Despite the difficulties brought about by COVID-19 and the uncertainty over Brexit, forestry has remained strong, meaning it’s been a busy winter for the D&R forestry team; felling licences, harvesting, woodland creation applications, restocking, new tree planting and registering carbon projects. This winter we’ve harvested sites up to 20 hectares and planted sites up to nearly 50 hectares, with many smaller sites down to a couple of hectares requiring the same care and attention.

As you would expect, given the tree planting targets shouted about by all political parties, the government commitment to carbon net-zero, the increase in ESG (Environmental, Social, Governance) corporate objectives and the potential returns from forestry investment, tree planting rates are on the up.

In February it was announced that there was an extra £6m being added to the FGS budget, whilst in December it was confirmed that the current FGS will remain open for applications into 2024, giving more land managers and investors the confidence to start applications this year.

Given the increased workload for Scottish Forestry, brought about by this increased desire in tree planting, Davidson & Robertson is advising clients to start planning well ahead of when they would like to plant their trees. With many sites requiring breeding bird surveys, which need to be carried out by mid-July, and the increased demand in saplings for planting, it’s worth picking up the phone now to discuss next year’s planting sites.

In addition to the more ‘traditional’ investor, a newer driving factor behind the increase in woodland creation is the opportunity for individuals or companies to either offset their carbon usage against that sequestered by their trees or sell the carbon units to someone else who wishes to.

For landowners, ‘growing’ your own carbon units is likely to be the most economical option. The Sixth Carbon Budget, published by the Climate Change Committee in December 2020, recommended planting 444,000 hectares of mixed woodland on the UK’s path to net zero, so the political drive behind woodland creation is set to continue, if not increase.

Whilst the processes for tree planting in Scotland have proved successful, in England, it is still more complex. However, new woodland planting could become more attractive as it has just been confirmed by the Forestry Commission that grant rates will increase this year. Details are set to be revealed later this spring.

D&R advice in England is to keep making preparations for planting as we anticipate being able to access increased grant funding in time for planting next season.

2020 saw a reduction in timber prices, to the point where Davidson & Robertson pulled some sales from the market during the summer. The Coniferous Standing Sale Price Index (published by Forest Research) showed a 19% reduction in standing sale prices in real terms up to September 2020.

As we moved into the winter, the prices for chipwood recovered strongly, followed by log prices. It means we are now taking withdrawn timber back to the market and encouraging clients to offer new parcels for sale.

Whether you’re a small farm owner or an individual looking for your own woodland retreat, to an investment manager or national company, there is support at hand. So, if you’re considering woodland creation, timber harvesting or creating Carbon Units then please contact D&R Forestry Manager  Robert Cleaver.

Rob can help you understand the Woodland Carbon Code process which can bring in extra revenue or offset you carbon footprint and is also on hand to help you through the planning and practical processes. Contact Robert Cleaver on 0131 449 6212 or email rc@drrural.co.uk 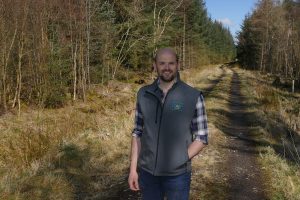